Destiny Connect: Tick Tock Travelers has a really slow start and a LOT of tutorials. So… how is Nippon Ichi Software’s new IP? Is it good enough to stand up against some of the other JRPGs on the Switch or does it get lost in the shuffle? Here’s what I think…

I received a review code of this game from NIS America Inc.

In Tick Tock Travelers, you play as Sherry. A young 9 (or 10) year old that goes on an adventure through time with the help of Isaac, her robotic companion and protector. Her best friend, Pegreo, joins her and on their journey they end up teaming up with two mystery characters that I won’t spoil for you because it has huge story spoilers. I really loved the cast of characters in this game. I loved Doctor Cheatstein and his wacky personality, I love how Sherry grew as a character throughout the game, and, well… everyone. Once the story got rolling I didn’t want to put this game down. I HAD to know what happened next and how this team of children, and Isaac, would save Clocknee Town from being stuck in time. During my quest I went back in time and to the future. I saw many different versions of Clocknee and even had some heartfelt moments along the way.

After I finished the game I was tempted to give it another go. It’s only 10 hours long (if you don’t grind) and I wanted more. I wanted to go through the story again, unlock some new outfits for Sherry and experience everything again, but decided against it because I had to get to writing my review.

The soundtrack is absolutely beautiful. It knows when to ramp up the music and bring in the electric guitars in battle, but also has nice, peaceful, and somber music being played on the piano. I can listen to the opening theme song all day. My only complaint is that there’s no voice acting in this game. I wish the budget for this game was bigger because voice acting would have really given those heartfelt moments more feeling than just reading them did for me. 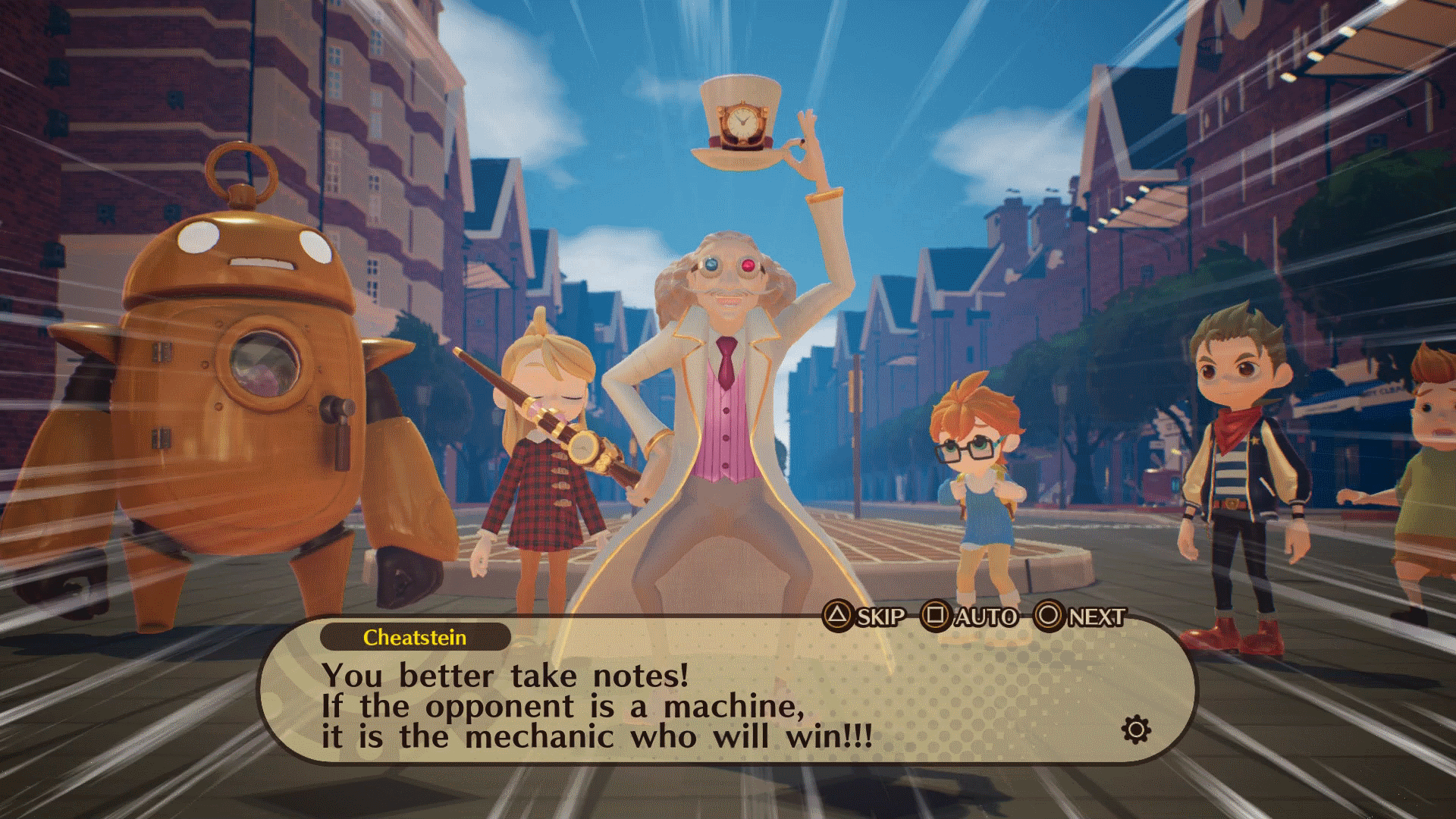 Tick Tock Travelers harkens back to the great JRPGs of yesteryear. There’s no over the top set pieces, insane moves that make your jaw drop to the floor, and huge landscapes to explore. The entire game takes place in the town of Clocknee. This game has your run of the mill turn based combat and that’s not a bad thing at all. One thing I really enjoyed was that I could fast forward battles with the push of a button. I wish more JRPGs would do. It made grinding levels when I got lost a breeze.

The one unique thing this game does have going for it is Isaac, Sherry’s protector and robotic friend. At first, he acted as a tank, but I was eventually able to install new gears in him that changed his appearance and class. He went from being a tanky guardian to healing firefighter and even became a aoe teddy bear wizard. Since Isaac is so versatile you can literally match him with any of the four other characters in the game and not have to worry about not doing enough damage, or having enough healing on your team. Isaac can change his class at will during battle and he’s saved my ass many times.

So who are the big bad guys in this game? House appliances. Yes, I said house appliances. One of the bosses that I fought was an fire breathing oven that threw burnt food at me. I ran into a flying toaster, floating iron, and 60s style televisions. The enemy variety is fantastic and I really enjoyed beating the living crap out of everyone’s Blenders.

I really like the battle system. The problem is the controls. The camera is really wonky and hard to control. The camera system is really weird. I can control the camera, but it also turns itself automatically and got me into trouble, and lost, many times during my 13 hour playthrough.

Another slight negative I have is that this game has a lot of padding to make a really short game a little longer. There’s a lot of backtracking to areas you’ve been to before and once I reached max level I tried my best to avoid every battle because it was just increasing the amount of time it took for me to get to the final boss and complete the game. I don’t have a problem with this game’s short length. It was actually a breath of fresh air. Not ever game needs to be 50+ hours long. I appreciated that the story was a main focus of this game and that it could be completed in 10-12 hours. My playthrough was almost at 14 hours when I beat the boss of the game.

After I completed the game I was taken back to the main title screen and I had the choice of starting a new game or continuing from my last save before the final boss fight. There is no new game plus or bonus unlockables for completing the game.

I really love the art style in this game. I read some reviews that criticized it because it’s not like Nippon Ichi Software’s other games, but I actually like that they tried to do something different here. Not everything has to be heavily anime inspired and JRPGs have been going that way for ages now. It’s nice to play something different. All of the characters, especially Pegreo he’s freaking adorable, look really good and the enemy variety is fantastic. You get to fight flying toasters, irons, big ass TVs, and so much more.

My only complaint is probably exclusive to the Switch version of the game. Some times everything can be very blurry and hard to see, but that’s because the resolution will drop to keep stable frames. Sometimes I couldn’t even see Sherry’s face because it was so blurry. The game ran fantastic on the Switch though and it’s beautiful, to me anyway. I can argue that this was originally a 8 hour game that the developers decided to stretch out to a 10+ hour game because of some of the sections I had to go through. There’s a lot of backtracking and worthless fetch missions that I feel could have been left out of the game. I had to revisit the final boss area three times because of in game events that forced me out of it. The final chapters just kept going and going and by the end I was just ready for it to be over.

There’s quite a few typos here. More than I’m used to seeing in a game that’s about to release. I hope the developers fix them before launch. It’s not a huge issue, but you’ll definitely notice them when you see them.

Destiny Connect: Tick Tock Travelers is incredible. I really loved it. It's one of the best JRPGs on the Switch. I'll put it up there with Alliance Alive, and Xenoblade 2. That's how much I loved it. It's not perfect though. It does have some serious pacing issues and has some serious padding to spread out its incredibly short length, but I think it's absolutely worth the asking price despite its short length. The story, characters, enemy designs, and simple, yet fun, gameplay kept me hooked from the time I started playing until I saw the credits roll.

I'm so glad I didn't buy Tem Tem. They can't get their servers right and people can barely play for 20 minutes before being kicked off. I'll probably buy it in a few months, but I'll stick to Pokemon for now.