Since Greedfall is right around the corner I decided to update my ole Technomancer review and (hopefully) bring some new eyes to one of Spiders best games.

I received a review copy of this game on Steam and put 30 hours into it before writing this review. I played the game from beginning to end. 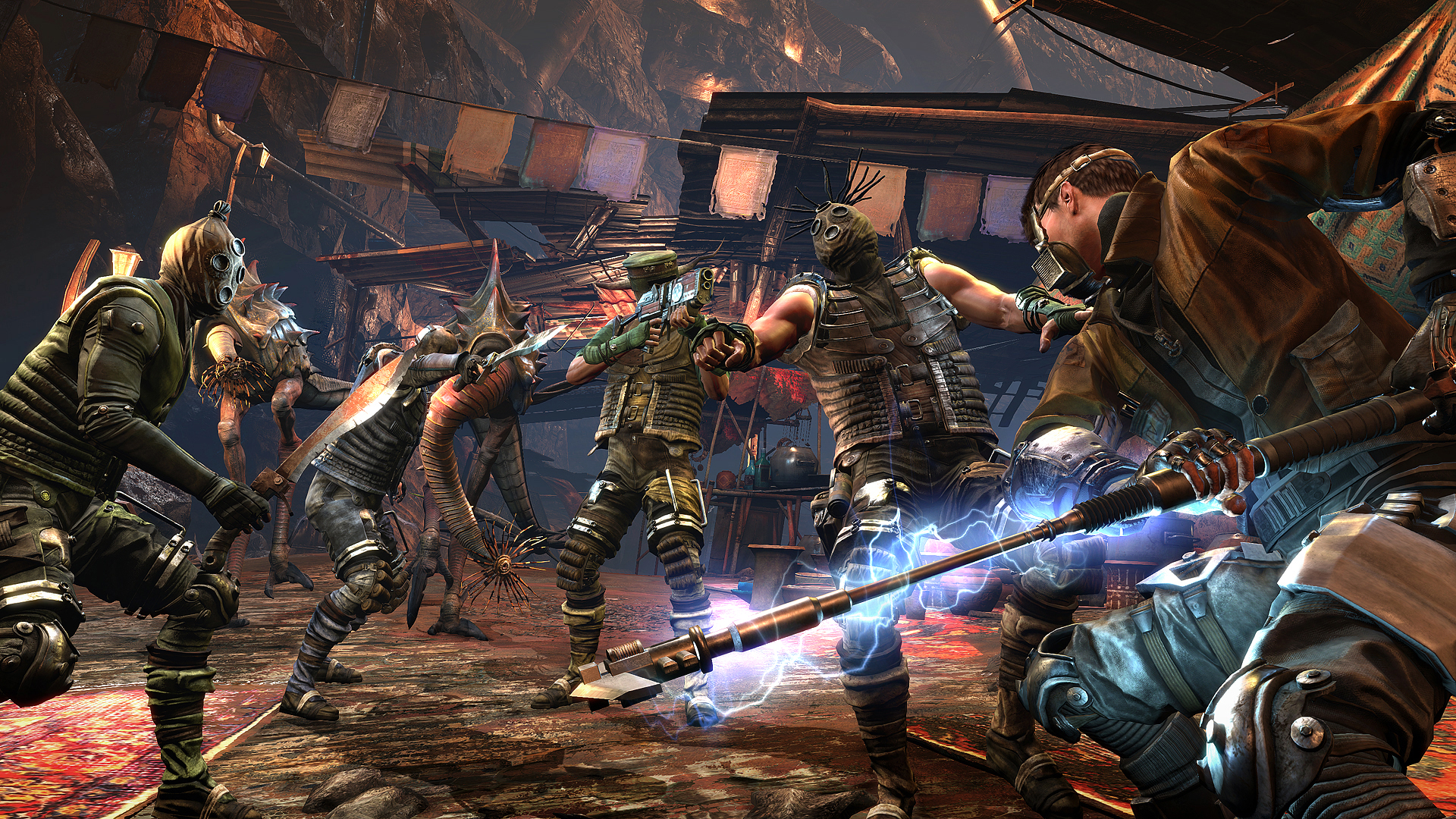 Mars War Logs was slow, stiff, and boring to play, but I still loved it. The Technomancer is none of those things. This game plays beautiful when compared to all of Spiders previous games. They’ve finally found a good gameplay formula to build from in my opinion. In The Technomancer you have three different classes you can play as. In battle you can freely swap between them or you can do like me and focus on mastering a single class instead of trying to be a jack of all trades because you’ll struggle a lot in the late game.

You’ve got your staff, mace & shield, and dagger and gun fighting styles. The mace and shield is your tank, the dagger and gun is your speedy/low damage/stealthy rogue while the staff is a good balance between the two in my opinion. It offers great damage and decent speed and works best with the Techomancy skill tree.

Finding the right playstyle for myself was fun because every style plays really well in this game. They’re all fun to play and I can see myself going through the game two more times so I can experiment with different classes.

One thing that I should mention is that this is not a open world game. The trailers made it look like we could explore all of mars, but we can’t. It’s zone based and they’re not big zones at all.

The PC port is surprisingly great. This game ran like a dream for me on multiple PCs at max settings. I didn’t experience any game breaking bugs, glitches, or minor annoyances at all during my 30 hours playthrough of the game. There’s a good amount of graphical options available to tinker around too and I always appreciate when a game gives me the option to turn off annoying effects like Motion Blur, etc.

The Technomancer’s story kept me intrigued the entire time I played. It’s not a ground-breaking triple-A story by any stretch of the imagination and it does have a pretty dull main antagonist, but I really enjoyed getting to know my companions, various different faction leaders, and world that Spiders created for us to explore. Even though the ending was a bit anticlimatic I still enjoyed the experience and journey there. I really hope there’s a sequel to this game one day.

The Technomancer, surprisingly, has some quality sounds. Everything sounds good in this game. Guns sound like they should, but lack variety of sound. What I mean by that is a pistol sounds just like a sniper rifle and it shouldn’t. Shield bashing someone has a nice oomph and blasting everything around me with lightning made me feel like a Sith Lord. The soundtrack is one of the best I heard back in 2016 and the only downside I can think of is the voice acting.

It’s better than Mars by a longshot, but some of the voice actors are really bad. The females in particular have horrible voice actresses. The males sounded really good in my opinion. Especially Phobos, and Zachariah.

Nothing will wow you in the looks department in this game (especially now in 2019), but when you think how everything has changed since Mars War Logs you’ll be really impressed when you boot this game up the first time. Everything looks really good in this game and some of the sunsets are absolutely stunning, but a good majority of the game just looks okay and that’s good enough for me because I wasn’t expecting this game to look like The Witcher.

The character models look fantastic and armor sets do too. I would have loved to see more of mars, but there is no open world exploration here and that is disappointing because I think this game would have been better for it since it feels like it should have been a open world game.

As soon as I started The Technomancer I was immediately taken to the character creation screen. At first I was excited because I thought I would be able to customize my face the way I could in Dragon Age Inquisition or Skyrim. That excitement quickly faded as I realized the only thing I could change was my face, hair, and eye color. I couldn’t even give myself a beard and that should be a crime in any game that gives us a character creator.

The armor customization, just like in Bound by Flame, is fantastic and I can easily spend hours at a workbench making my chosen armor sets look badass and to be honest the character creator isn’t horrible. It’s just half assed.

Spiders has finally managed to give us decent companions. They still can’t match up to any Mass Effect or Dragon Age companion, but they don’t need to. I enjoyed getting to know some of them while I completely hated every moment spent with others. Phobos, Andrew, and Niesha were really cool characters, especially Niesha, but Amelia and Scott were dreadful in every way imaginable and I never bothered to have them in my party unless I needed them for a particular mission.

The romance that they advertised is Amelia and she’s a terrible character. Niesha isn’t much better, but at least she grew, a little, as a character as the game progressed. Amelia didn’t and every line she spoke made her sound like a immature teenager.

Romance is in The Technomancer, but I wouldn’t get too excited about that. While you can romance some of your companions the only one I actually found decent enough to romance was Niesha and that’s only because of how well I think her background was done.

The romance itself isn’t really great, but I don’t think it’s bad either. It’s like those old Knights of The Old Republic games. The screen fades to black and the “sex” happens. It’s poorly done, but I enjoyed getting to know my companions so it gets a free pass here. 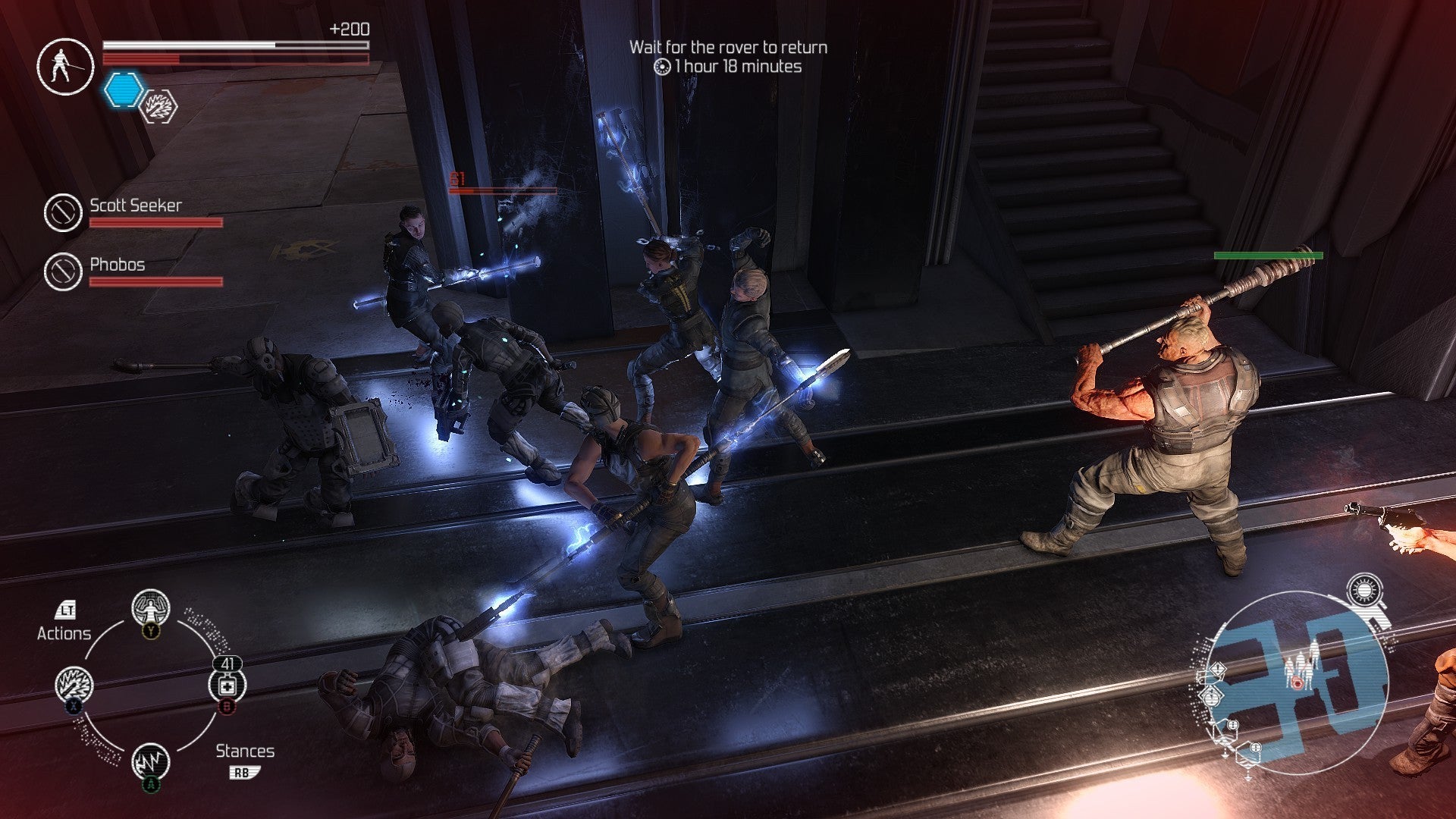 When I finally reached the person that had been hunting me for the entire game I expected… more then what I got. The Technomancer almost fell apart at the end of the game because of the anticlimactic boss fight at the end. You even get the best dagger/gun in the game and can only use it for about ten minutes before the game ends. I couldn’t use it at all because I was a staff user and never bothered to level up my agility.

No New Game Plus:

New game plus isn’t a requirement in any game, but if you’re going to give us the best dagger and handgun in the game why in the hell are you only going to let us keep it for the next 5 to 10 minutes before the game ends? I’m not going to spoil anything for anyone because that would be incredibly douchy of me, but it baffles me because I was hoping to take my new badass weapons into new game plus so I could actually use them. This will not affect the verdict in any way. I just wanted to bitch about it…

The Techomancer is a good B grade game. It's not a big-budget game with glorious graphics and it doesn't need to be. Spiders have come a long way with their games. Mars War Logs was an average game that had a ton of potential and this game tapped into that potential and gave us something memorable. This is not The Witcher 3 or Mass Effect. It's nothing like those two games and it doesn't need to be. The Technomancer is the best game this developer has released to date and I think the future is very bright for them if they can keep this type of quality up with future installments. The only thing I want to see improved on in a sequel is giving us more dialogue options and a story that actually makes sense. I really enjoyed the gameplay, setting, and most of the characters that I met during my 30-hour journey.

Movie night with the fam!

This is ridiculous. What’s the point of having an alpha test if no one can get in and play. By the time this shit works I won’t have any time to play. This doesn’t look good for the game at all.

Okay so I want to like Temtem and I’m pretty sure that I would but it’s not working for me at all.