Good luck pronouncing the name of this game! My next review is of a game series I’ve never played before. Here’s what I think of Utawarerumono: Zan!

I received a review copy of this game from Nis America, Inc.

Utawarerumono Zan will be released on September 10th here in the US.

I made the mistake of playing this like a Dynasty Warriors game. I saw a bunch of enemies and just charged. I got my ass whooped and almost died. I actually didn’t like this game for the first few hours that I played because I was playing it wrong. Yes, it’s a button masher, but it requires a little more thought than your average Dynasty Warriors games. Once I learned how the customization worked and how to effectively break enemies guard I got a lot better at the game and started to enjoy it. I made sure I had a well rounded party that could both break down a strong enemy’s guard as well as do good damage to their health.

I had one, some times two) of my party members specialize in piercing damage. Piercing damage ignores their armor and goes straight for their health. The downside is you can’t stun enemies that way, but you do really good damage. It’s a great way to kill bosses. Bosses aren’t your run of the mill roided up Dynasty Warriors bosses. They have health bars and can quickly ruin your run if you fight them unprepared. The story mode is very easy to get through. It’s basically a learning curve for the game. Playing through arena mode is where things get tough because you’re forced into these one on one battles against high powered opponents that plays like another player would. 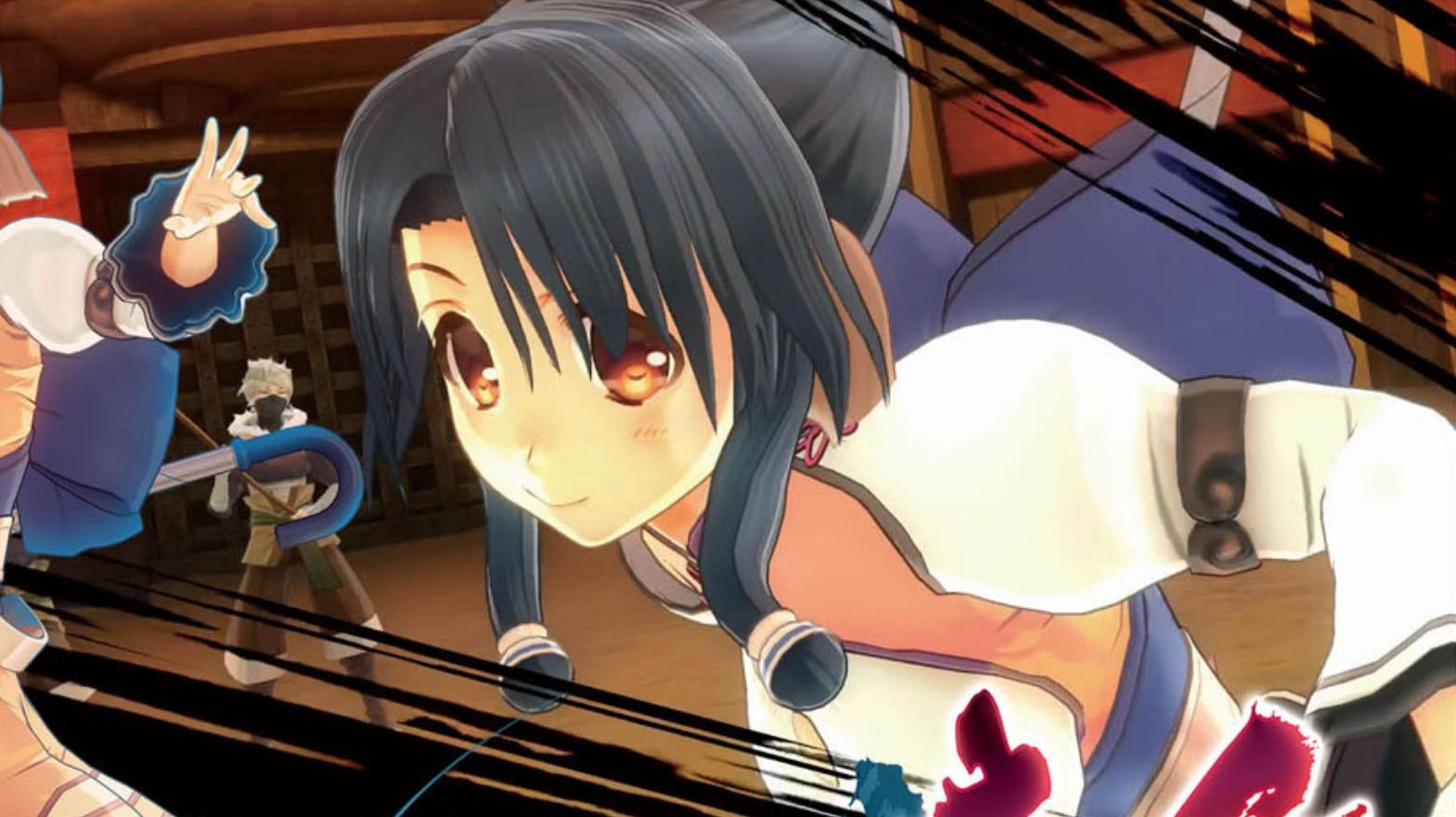 This game, like Dynasty Warriors, has a simple combo system. If you’ve ever played a musou game before you’ll know what I mean. You press, square, square, square, and triangle to do a combo. The big difference is that’s not really how this game works. You have to press square 5 to 6 times to do your combo. Pressing triangle will interupt that and take you out of your rthym. It was fun figuring out when exactly to press triangle during battle and once I learned the combat system I started to have a lot of fun with it to the point that I didn’t want to put the game down.

Playing through the game unlocks various different modes for you to play. I eventually got access to Battle Recollections. This mode lets you replay story missions. Some times during a story quest a side quest won’t pop up or you’ll accidentally skip it. This is a great way to play through all of the side quest so you can collect all of the rewards for doing so. The next mode I unlocked was Free Mission. Free Mission is a series of missions that’s locked behind difficulty levels. You get the low tier stuff at level 10 and it scales all the way to 45+. I also unlocked Arena, the ability to upgrade my equipment and military medals which gives you goodies for completing certain task in the game.

Side missions aren’t just about killing x amount of enemies. Some missions will have you gathering specific items or avoiding a roided up boss encounter while completing other objectives in the vincinity. It’s a nice change of pace from all of the killing you’ll be doing in the game.

There’s a lot of content here and most of it is very enjoyable. My favorite mode is free mode. I can earn a lot of money and skill points by playing through it with my favorite characters. 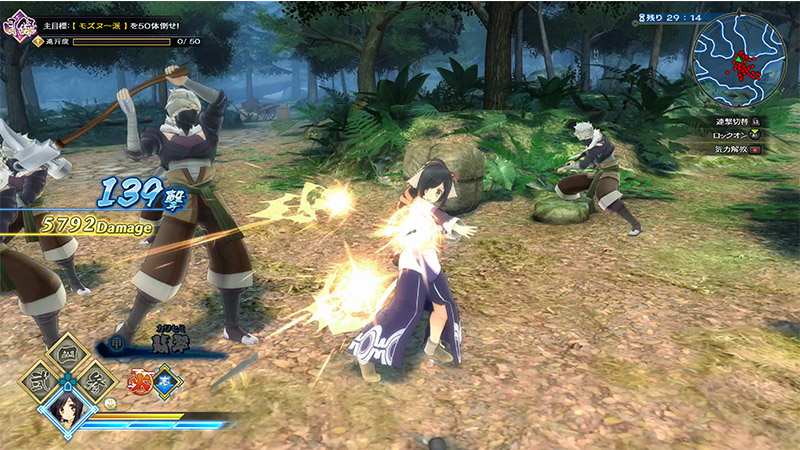 I want to own the soundtrack to this game. That’s how much I enjoyed listening to it. Especially the main menu song that plays as soon as I booted the game up. It’s relaxing and I can’t help, but listen to it for a about 10 minutes before starting my game. The voice acting is mostly good too. Every scene has Japanese voice acting. The cutscenes are really basic though and tend to last longer than what I’m used to in this genre.I really enjoyed listening to this game in action. I’ve always said that a good soundtrack can make or break a game. This one definitely adds to it along with the good voice acting and overall sound effects.

I really love the diverse roster in this game. Everyone plays incredibly well. You even get a character that fights on a giant bird! And that thing whoops all kinds of ass. If I feel like punching and kicking the living crap out of people I’ll play as Kuon. There’s a fighting style here for everyone. You’ve got your speedy rogue, bow users, magic users, and more. The characters here are interesting and are fun to play as. What more can you ask for in a game like this? 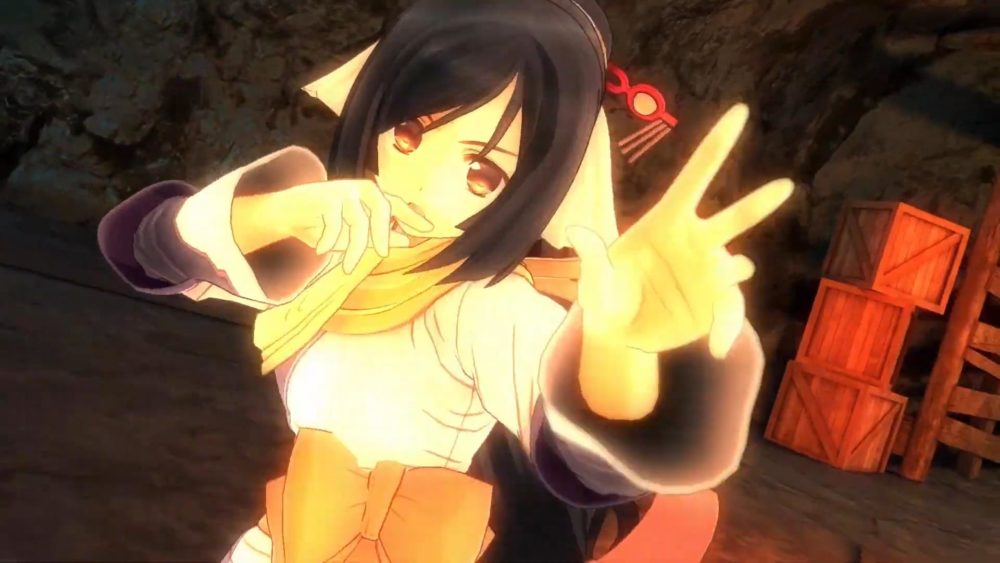 When I booted this game up I wasn’t just treated to some nice music I also got treated to a beautiful view too. You see the main protagonist and all of his companions staring off into the distance. Some of the stages in this game are really looking good looking while others aren’t. When you’re fighting in open areas like a field it looks great. When you’re fighting in a cave it doesn’t. The character models are hit and miss for me. I like the way the males look, especially Ougi, and dislike the way some of the females look. They tried to make them look too cute to me. It’s an artstyle that I don’t really like because it seems like it’s over the top to me. It’s super animeish.

The performance is good most of the time, but I did experience some frame drops here and there. I’m hoping a day one patch is in the works because it does slow down considerably in heavy moments and it’s a real distraction. It’s nothing major like game crashes or falling through the floor. 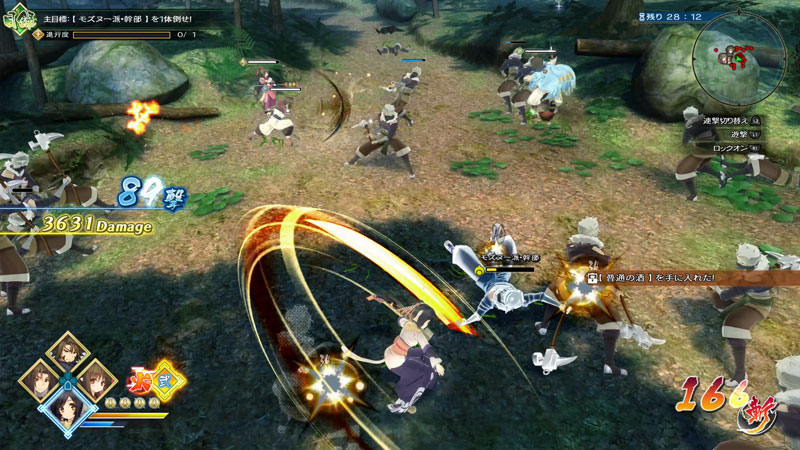 You play as Haku, a man that doesn’t remember anything about his past and meets a bunch of interesting companions during his journey. His adventure takes him from being a wanderer on the road to living in the Imperial City doing various different missions for the queen including fighting in wars. The story honestly is alright. It’s not very deep or interesting and is just there. There are some cool moments, like that episode that focused on Haku and Ukon infiltrating a ship to catch a criminal, but for the most part it just served as a way for me to unlock new characters and new game modes. Most of my time was spent doing the other modes in the game. Games like this would be amazing in local co-op. Sadly, local co-op games are quite rare these days. A game like this should have it though. You and a friend or relative could choose your favorite character, or characters, and play random missions together. You could keep story mode single player if you want to and just let us do battle recollections and free missions together. If you want to play with someone that other person must also own the game on their own Playstation console.

The average mission will only last you about 5 minutes and map you fight on will be incredibly small. That bothered me throughout the game because I was hoping I would have the chance the fight on a huge battlefield, but it never happened. It was always a super small area filled with mobs of enemies to slice through. During the mission (if you’re playing through story mode) you’ll occassionally be interupted by a cutscene and most likely a boss fight.

I enjoyed my time with Utawareumono: Zan. It's a different type of musou game that tells a decent story, has a really good roster, and great gameplay too. The extra modes that I unlocked kept me from getting burnt out in story mode and I think this was a great introduction to the series. I wish the battles would last longer and that I had bigger maps to fight on. The lack of a local co-op mode also really bugged me because there's no reason why a game like this shouldn't have it. What this game does do well is offer a variety of different modes to keep fans of this genre engaged in the game and unlockable customization items will have completionists trying their best to get everything.

Time to knock this workout out 👊🏻

Outside of the horrible voice acting by the female protagonist in this trailer, I think this is a day one buy for me.

Good. I would rather have Tencent than Sony having control of Warframe - https://t.co/1nXe0SkD4F